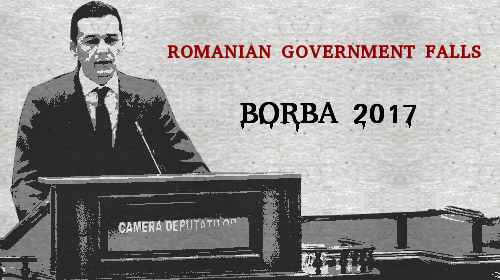 On 21st June 241 members of the romanian parliament voted to pass the no-confidence motion against the Government led by Sorin Grindeanu, Prime Minister, even more than the required 233. This is not the first fall of the romanian parliament, but it is the first time that the own Prime Minister's coalition asks for it. This coalition is made of the Social Democratic Party (PSD) and the Alliance of Liberals and Democrats (ALDE); this motion has been passed saying that Grindeanu failed to apply the governing program against corruption in Romania.

Sorin Grindeanu has answered to these accuses attacking PSD's leader, Liviu Dragnea, saying that he used this situation to achieve power himself, knowing that he couldn't do so in normal circumstances. The situation is even more complicated as Grindeanu stated that he got to power just because of Dragnea's support to him, who personally said to the future Prime Minister how he would have been remained his friend and ally. Grindeanu probably wouldn't even have accepted the position without Dragnea's support, therefore is now inside an illogical situation not understanding the reasons behind such moves from his party. The coalition says that he did a good job but it wasn't enough for what they really expected from him. All of this happened six months after the definitive victory of PSD on elections; the party had therefore all the needed power to apply its own decisions. All ministers from Grindeanu's Government have been chosen from the party itself, yet are today listed in the reasons of the no-confidence motion, which represents a huge loss for the coalition.