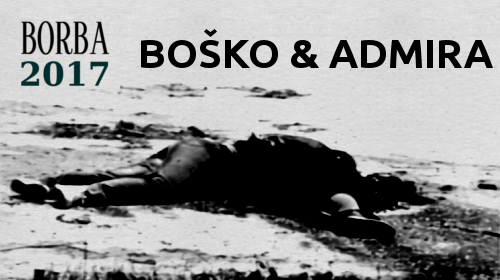 "They didn't share the same origins, nor they had the same god, but they had one eachother and the dream of running away from there [...] is the sky the only place where we can be together?" writes the text from the song "Boško i Admira" by Zabranjeno Pušenje. Sarajevo's Romeo and Juliet, known as such to the whole world, were killed the 18th of May 1993 on Vrbanja bridge with sniper bullets, regardless the agreements concluded with both the armies for a free transition to the serbian side.

Boško Brkić and Admira Ismić were holding eachother by hand while they walked on the right side of the Miljacka, they had hope for a life with no war, she waved her backpack and hopped. Then they first hit him, and right after Admira, who hugged his loved one for the last time while they died together. They layed hugged 7 days, then the army of the Republika Srpska picked the couple up to bury them together. Boško and Admira have always been inseparable for 8 years, causing attention wherever they were in Sarajevo: not even a bullet had separated them. They already planned a marriage and a life together even before the start of the war, then the war started but that didn't stop the couple, they got agreements with both the armies; Sarajevo's Romeo and Juliet had to walk their last kilometer to freedom, but someone didn't like that it was possible for two people from different religions to hold eachothers hands not being afraid of death. They didn't just want to kill two lovers, but the idea behind them that pierced any border.