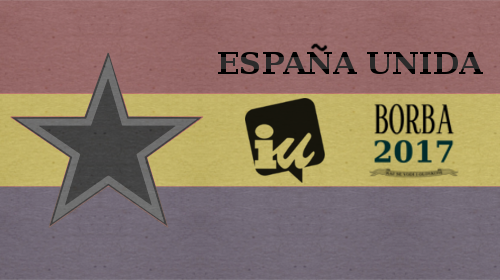 In this article we are reporting yesterday’s press release from the Izquierda Unida (IU – United Left), translated from Spanish, in which they state their position against the violence perpetrated by the government and were they offer their solution to the crisis:
What is happening today in Catalonia is the resounding failure of Rajoy’s Government. The images and videos that we are receiving reflect the repression with which the Government is responding to a legitimate and peaceful demand from Catalan society. The brutality of state security forces and bodies is not only disproportionate, but also a serious political error that will mark the memory of Catalan society and negatively affect politics after 1-0.

From IU we stand in solidarity with the Catalan society and condemn the repression and authoritarianism of the PP Government. We also denounce that this strategy is aimed at leading the country to an unsustainable tension of which the PP intends to obtain electoral revenues. Consequently, we demand the resignation of the Government of Mariano Rajoy. No political solution will be possible with a PP government. We think that it is still the time for politics, which implies opening a negotiation that includes a referendum agreed that will allow Catalan society to decide on its future. We also consider that the best formula for our country is the Federal Republic, which will have to break through in this crisis of State against various intransigent nationalisms and parties rotten by corruption. Only a state model that guarantees social rights and meets the needs of its citizens, while recognizing that Spain is a plurinational country, can be useful to solve the political problems that we are addressing. Finally, we encourage the IU militants to join any citizen mobilization that defends civil rights and democracy, providing our own republican and federal position.
October 1, 2017