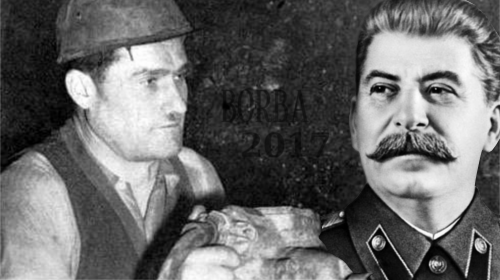 The man who won Stalin by shovel

Alija Sirotanović, born in 1914 in Orahovo near the town of Breza, was a Yugoslav miner whose popularity came to be right after his new first record in coal extracting on 24 July 1949. He digged 152 tons of coal in 8 hours of work, ~40 tonnes more than Soviet Union's most popular hard-worker whose record had been a strong mean of propaganda for decades. What could have been worse for Stalin's rift with Yugoslavia than a symbolic Yugoslav victory over his own promulgation? Thousands of tanks could not fight this defeat, not this time. Sirotanović became the new hero of the Southern Slavs and of the local workers. His record, just like Stahanov's one, convinced people to work harder, faster and better; competitions were held in the nearby mines in the following days and months, miners were doing their best to surpass Sirotanović, the next day he reached his record another mining crew led by Nikola Škobić surpassed the coal amount by 14 tons for a total of 166. Two records in two days? That's impressive, but that's not it yet.

What Alija Sirotanović and Nikola Škobić accomplished was just the start of a series of new first records achieved from different local miners in just two months. Ibrahim Trako, from Zenica, digged 270 tons; Risto Mijatović, Džemal Ramović and Edhem Škorić, all from the mine of Kakanj, digged 354, 442 and 396 tons of coal. And finally, Abdurahman Babajić, on 10 September 1949 digged an extraordinary amount of 1010 tons. Those men were the new heroes of the Yugoslav working class, yet the most eulogized one was Sirotanović, the man who initially broke the Soviet record that led the list for so many years and made possible this glorious series of accomplishments, he even got his face printed on the new 20 thousands banknote from the 80s. The legend says that when president Tito offered him whatever he asked he just answered "A car and a bigger shovel!". He in fact kept his old lifestyle and died in 1990, still being a modest and unpretentious man. Ironically, his death came right before the start of Yugoslavia's collapse, as if he had been graced from seeing how his glorious past and his beloved country went to ashes.