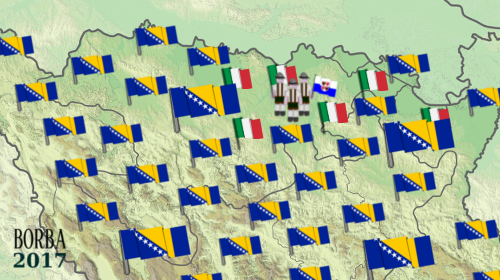 Did you know there are people speaking the Trentin dialect in Bosnia and Herzegovina? Well here is an article about that: the Italian communities of Bosnia and Herzegovina. We will specifically focus on the community of Štivor, a small town in the municipality of Prnjavor, a city where the population is almost entirely Italian from the Sugana Valley (Valsugana in Italian). The Italian community of Štivor is roughly 100 years old, formed after a mass migration from the Sugana Valley. The migration happened because in the late 1880s a flood of the River Brenta nearly destroyed the small towns in the valley, leaving most its inhabitants not only without a home but also without a job and considering that the economy thrived in that area, it dealt also a heavy toll on the morale.

The first waves of migrants however didn’t go towards Bosnia but rather towards South America, specifically Brazil where it was the biggest Italian community abroad. This choice however ended up being the worst possible, since the man who had to arrange the travel, ran off with the last amount of money they used to pay him. It is not known what eventually lead them to migrate to Bosnia however this didn’t leave us without speculations and unconfirmed sources, two of which we want to report in our article. The first and most credited source is the one that states that the Kaiser Franz Joseph I, moved by compassion after hearing their tragic story, offered to settle them in Bosnia, which Austria-Hungary de facto just conquered from the Ottoman Empire. Another source says that, since Austria-Hungary needed manpower to complete different construction projects, of which some in Bosnia, many decided to join as labour force. However, it is not impossible for both sources to be true, because Austria-Hungary, under the administration of the Foreign Ministry Gyula Andrassy, did pursue a policy that tried to settle loyal populations in Bosnia and its highly possible that among these there were the Sugana Valley people. The wave of migration reached different towns of Bosnia, like Konjic, Tuzla or Banja Luka, close to the last one, there was Prnjavor, were a large group of migrants founded the town of Štivor. What is interesting about the Štivor community, unlike the other ones, is that its people preserved their language, the trentin dialect, and their culture, whilst some adapted like in Tuzla or eventually disappeared like in Konjic. Regarding their language it can be said that compared to the one widely spoken in modern day Trento, it did not suffer the influence of the venetian dialect, thus allowing it to preserve some autochthonous words. The closest dialect to the Štivorian one is probably the one spoken in central Trentino. There is a book written by Maria Rita Rosalio, “Studies on the Trentin dialect of Štivor” (In Italian “Studi sul dialetto Trentino di Štivor) which analyses deeply the local dialect. Another thing that can be said about these communities is that to preserve their culture they organized many different “cultural clubs”, like the one that was formed by Štivorians who migrated back to Trentino, the “Štivorian-Trentinis club” from Roncegno (in Italian Circolo Trentini di Štivor), but many of those are connected directly to a wider organization that is the World Trentine Organization. This organization is the main promoter of cultural activities and events that regard Trentin communities abroad and in the specific case of the ones living in Bosnia, they funded the Italian school of Štivor, where students can learn in Italian.