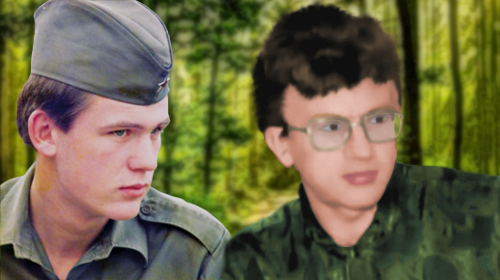 Two highly similar stories about heroes who gave their lives for others, two stories about young brave men from the Balkans' 90s war who went against their own "companions" in order to save people's lives, even if not from their own side. Srđan was a 26 years old from Trebinje, member of the Army of the Republic of Srpska, who gave his life to save Alen Glavović, a young man who was being beaten by other soldier of the RS Army due to his nationality: Srđan distracted them, giving Alen the chance to run away while they started beating him to death. Refik was a 36 years old man from Zavidovići, member of the Army of the Republic of Bosnia and Herzegovina, killed with 22 bullets by Jasmin Viković, another soldier of the RBiH Army, for defending multiple times 12 serbian prisoners from his intentions.

It was 21st January 1993, Srđan was walking by his Trebinje hometown's square. A group of military reserves from the RS Army was identifying locals walking around, so when they found out Alen Glavović's name, a friend of Srđan who was sitting at a bar, they arrested him and started harassing him. Srđan went against them, so the soldiers moved on him, forgetting Alen and therefore giving him a chance to run away. They started beating Srđan to death with their Kalashnikovs' wooden gunstocks, leaving him forceless on the ground in front of the police barracks. Srđan passed away in his hometown's hospital on 27th January due to his injuries: his father Rade wrote on his death notice "He died fulfilling his human duty". Young Srđan deserved many posthumous awards, streets have been named after him and many plates have been made in his memory, but more than by anyone else, he's continuously remembered by Alen Glavović, the man he saved and who will be for a lifetime grateful for his deed and who promised to visit Srđan's grave every single year of his life with his own family. "Srđan was a good friend to anyone, no matter what God they believed in or where they came from: he was a good sportsman, a good actor but first of all, a good comrade" says Glavović about his saviour. 12th August 1992, Zavidovići, a drunk soldier of the RBiH Army, Jasmin Viković, is coming in to beat and torture 12 members of the RS Army, held prisoners in the local technical school. When Refik Višća, another RBiH Army member, came to know his intentions, he rushed in and succesfully stood up for the captive soldiers, driving away drunk Viković. But when Jasmin Viković came back a second time to beat the 12 prisoners, he couldn't handle anymore Refik getting in his way with all his strength, so he killed him by firing 22 bullets. Refik Višća is another hero who saved not only one life, but 12 different lives of "enemy soldiers". Still today no street or public place bears the young brave man's name, not a square nor a school. His heroic sacrifice found no thankfulness, his only award has been death and oblivion, a perfect proof we did not deserve him neither then nor now.