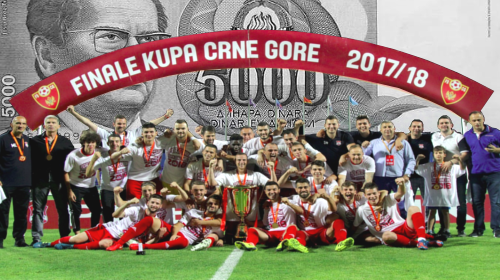 "I wouldn’t say that they changed it, but they rather took back OFK Titograd because it honored our country from the Sixties to the Nineteens (’92-93). The team, as I said many times now, was founded in 1951 and it was firstly named Mladost: for 7/8 years of existence it refused to play against other opponents or ended up loosing every game. After the change of name, as if a new energy came in, this team has always been in Montenegro’s pole position and then it succeeded in becoming relevant in the Jugoslavija’s league too. There’s also to underline the fact that this team has been giving birth to so many phenomenal players, everything that is about Montenegro’s football. [...] We didn’t change the name because of nostalgia, but we chose to distinguish ourselves from the 35 teams named "Mladost" both inside and outside ex Jugoslavija’s territory, wanting to be more recognizable using the name and flag of the good old days and trying to obtain good results thanks to the new energy gained! [...] I must say that we didn’t made this change out of the blue: from the moment I took the reins of the team, the last first of June, we tried to stimulate the public opinion. This has been extremely positive, we all tried to act insidiously and the result of the poll we did, showed us that the 77% were in favor of bringing back the old name OFK Titograd: it turned out that everybody from ex-Jugoslavija approved it too! Furthermore, Pamić ‘s arrival as the new coach showed so much interest not only in Bosnia Erzegovina and Croatia but also in Serbia, Slovenia and obviously Montenegro. I see so much attention from journalists outside Montenegro, and it seems to me that we managed to guide this attention, through these latest news, in the right direction." - Vladan Vujović, OFK Titograd’s President