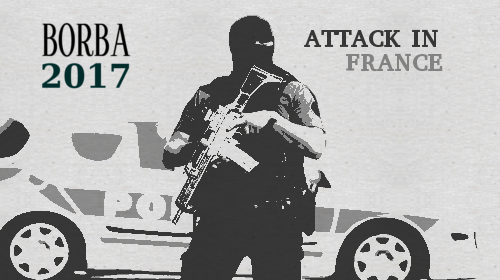 Armed driver killed in France after trying to attack a police van with his auto-bomb. French authorities describe this as a security incident, yet it's about a voluntary attack; witnesses confirm. Besides this general description we cannot assure the other details, mostly provided by witnesses' stories. One of them said he heard multiple sounds of explosions after some shots fired near a car surrounded with smoke.

This is not the first time France is victim of a terrorist attack in this year. From 2015 after the unlucky event when 130 people have been killed from ISIS supporters France is in an emergency state: during the last elections a police officer has been shot, while earlier in June one has been assaulted with a hammer from an algerian man. Once more we nearly escaped an unlucky event, the explosive inside was enough to blow up the whole car leading to the attack quoted before, so says the french interior minister Gerard Collomb. He also added that the french police has been targeted from the terrorists for years. The man found in the nearly exploded car was, says the minister, 31 years old and was also known to the french intelligence; he died in the attack. Many people's thoughts lead to unsatisfaction with the security measures of the whole country and consider a new security law.